The Thargoid Scout is an alien vessel used by the Thargoids. Four Scout subtypes have been identified: the Marauder, the Berserker, the Regenerator, and the Inciter.

The wreckage of a lone Thargoid Scout was first discovered on September 28, 3303, on the planet HIP 17125 A 3 A in the HIP 17125 system.[1] The circumstances of the discovery are somewhat mysterious, as the original discoverer of the wreckage is unknown.[1] The wreckage can be scanned to create a "Crash Site" POI in the navigation panel to simplify finding the site on future visits.

SRV analysis of the wreckage identified it as a Thargoid Scout by comparing it to existing knowledge databases. High concentrations of mycoid particle, the bioweapon used by INRA against the Thargoids during the first conflict in the mid-3100s, were also detected. Scattered near the wreck were green canister-like objects identified as Thargoid Biological Matter.

A second Thargoid Scout crash site was discovered on January 6, 3304 by CMDR Sileo (Wing Atlantis), on planet 2 A in the Pleiades Sector LN-T C3-4 system.[2]

On February 27, 3304, following several weeks of Thargoid Interceptor attacks on stations equipped with Aegis laboratories throughout the Pleiades Nebula, pilots began reporting encounters with active Thargoid Scouts both in the Pleiades and in the fringes of the Core Systems. The Pilots Federation designated these vessels "Marauders". The ships demonstrated greater agility than Interceptors, but proved vulnerable to conventional weaponry.[3] Unlike Thargoid Interceptors, all encountered Thargoid Scouts were immediately hostile to human vessels, and they were always found in groups of two or more.

On June 28, 3304, three new variants of Thargoid Scouts were sighted for the first time as the Thargoids launched a counterattack into the Core Systems focused on Deciat. The Berserker is a more powerful iteration of the Marauder that can release an energy pulse that enhances the damage output of other nearby Scouts and causes them to fire a barrage of caustic missiles, while the Regenerator can restore the hull of other Thargoid ships, and the Inciter improves the movement and manoeuvrability of the other scouts.

On February 21, 3305, a third Thargoid Scout crash site was discovered by CMDR Darkjayson on planet 10 A in the Arietis Sector ZE-A d75 system.[4]

The Thargoid Scout has obvious organic characteristics, but not to the same extent as a Thargoid Interceptor, and it has an octagonal configuration reminiscent of both Interceptors and Thargoid Surface Sites. It is also much smaller than an Interceptor, and comparable to an Eagle in size.

Thargoid Scouts have two weapons: a rapid-fire energy weapon that partially breaches shields and can inflict damage directly to a ship's hull, but modules are safe from the phasing damage. They occasionally fire caustic missiles at their target, though this is rare unless a Berserker is present in the instance. These missiles are similar to those used by Thargoid Interceptors; which cause caustic damage. The energy weapon is weak, and a well-shielded ship should have no issue shrugging off multiple salvos and because of the low threat bringing along Decontamination Limpets will easily deal with any damage or caustic residue. Overheating your ship to 180% will burn off the caustic damage after several seconds (a bubbling sound will be heard), or to 250% to burn it off immediately, with the corresponding notification of the on-board computer. Otherwise it will stay on your ship until you dock at a station. [5]

In sharp contrast with Thargoid Interceptors, Scouts are weak both offensively and defensively, relying on attacking in numbers to make up for the deficit in combat capability. Scouts lack the ability to deploy Thargons, have no Thargoid Hearts to target, do not possess shields, cannot regenerate, and are not especially durable. Only the Regenerator variant can heal nearby Scouts via limited-range pulses.

Small and medium ships operating alone may struggle while confronting large numbers of Marauder Scouts, but large ships with enough weapons and shields can take on these encounters with relative ease. Scouts should be dealt with quickly, however, as a large group of them can inflict heavy damage during prolonged combat. The most efficient way to take out a group of Thargoid Scouts is to first kill the Berserkers, then Regenerators, then the Inciters and save the Marauders for last.[6] 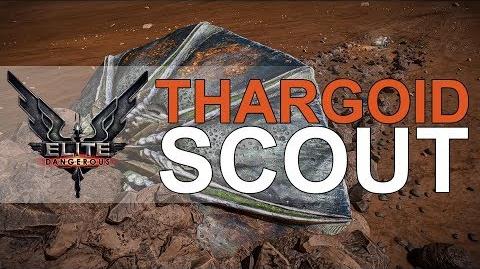 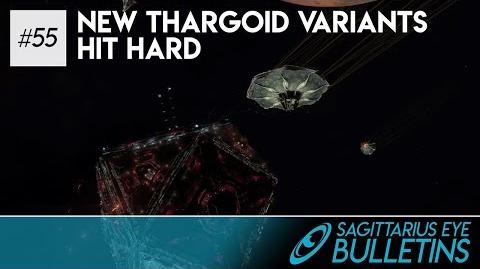 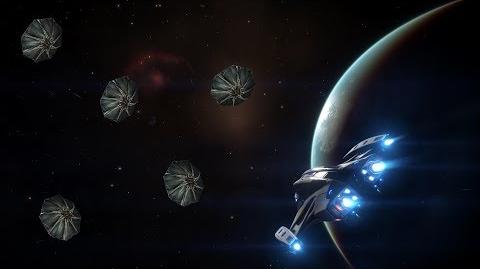 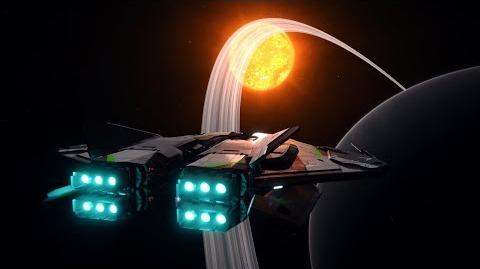 Elite Dangerous 3.2 - Thargoid Scout hunting in VR
Add a photo to this gallery

Thargoid Scout close up side

The ventral side of the Scout

The profile of the Scout

The crash site from above

The ship compared to an Eagle

The SRV analysis of the wreckage

Thargoid Scout Blueprint
Add a photo to this gallery

Retrieved from "https://elite-dangerous.fandom.com/wiki/Thargoid_Scout?oldid=133447"
Community content is available under CC-BY-SA unless otherwise noted.