These strange objects are of Thargoid origin. They have the ability to repair themselves by extracting non-organic material from their immediate environment, and this self-repair mechanism can severely damage starships and other machinery. They can also scan nearby vessels and celestial bodies, and transmit information about the scanned object in an encrypted form.

Thargoid Sensors, originally known as Unknown Artefacts or UAs, are devices of unknown purpose created by the Thargoids and found at numerous sites across the Pleiades Nebula. The first of these objects was discovered by independent pilots on May 4, 3301, although it is believed that the Federation was already researching them by then. When Starports began going offline due to technical problems caused by Unknown Artefacts sold on local black markets, a phenomenon first reported in the Warkushanui system, it became a popular practice among outlaw pilots to sell the objects with the express aim of shutting certain Starports down. On June 26, 3303, it was discovered that the objects could be used to open doors in Thargoid Surface Sites, directly linking them to the Thargoids for the first time. On September 26, 3303, Unknown Artefacts were formally reclassified as Thargoid Sensors.

Thargoid Sensors are approximately two meters long, with a "head" resting atop a segmented stalk supporting three columns of canister-like objects. They emit constant noises that can be heard in close proximity. If shot with weapons or rammed, the Sensor will break up into a number of Materials called Sensor Fragments. A Thargoid Sensor will inflict constant corrosive damage to random ship modules, similar to Toxic Waste, unless transported in a Corrosion Resistant Cargo Rack. If a Sensor is ejected from a cargo hold, it will degrade over time and disintegrate in about six minutes; the degradation can be halted and reversed by returning it to a cargo hold. Note that if a Thargoid Interceptor detects a ship is carrying a Thargoid Sensor, it will immediately become hostile.

It appears that the Thargoid Sensor performs some kind of scan of the closest celestial object or station and then emits a highly distorted Morse code which represents that body.[1][2] A Sensor will also scan all ships within 1 kilometre, and point and align itself with Merope, a star system in the Pleiades Nebula. Recordings and decoding of Sensor data also show that it produces a basic line drawing of the ship it scans.

Thargoid Sensors were originally rare,[3] but have become common in systems within a 150 ly radius of Merope that contain Non-Human Signal Sources or Crashed Thargoid Ships. A Threat Level 4 Non-Human Signal Source will usually contain a single Thargoid Sensor, though if a Thargoid Interceptor is present it will become hostile if the Sensor is retrieved. Alien Crash Sites sometimes contain salvageable Thargoid Sensors found near the wreckage. They can also be found at certain Shipwrecks, such as the crashed Anaconda on LTT 1935 6 A. Outside of the zone centered on the Pleiades Nebula, they may also be found in other regions known for Thargoid activity, such as the Witch Head Nebula and Coalsack Nebula, and in planetside sides known as Nonhuman Signatures.

Sensors can also be obtained from Threat Level 4 Military Convoys, where they are being transported by a Type-9 Heavy and can be stolen using Hatch Breakers. There are two convoy configurations: the first includes the Type-9, a Vulture, two Anacondas, and assorted other ships, and the second includes the Type-9 with an escort of four Anacondas. The Type-9 will usually charge its Frame Shift Drive and jump to another system to escape, so it is recommended to attack in a Wing, with one member focusing on the Type-9 while the others distract the escorts.

"UA Bombing" was the colloquial term for the practice of selling Thargoid Sensors en masse at a specific station with a black market, with the goal of shutting that station down using the Sensors' technology-disrupting properties. Stations that were shut down could still be docked with, but had most services disabled, similar to a Lockdown state. While the effects of UA Bombing were not permanent and would reverse over time even without intervention, the suspension of vital station services for several weeks could be an inconvenience.

UA Bombing required a significant quantity of Thargoid Sensors, up to 100, though the number varied. The Sensors had to all be sold at the same station within the same week for the UA Bombing to be successful. Once enough Sensors were sold, the station would experience "technical issues" and be "on the brink of closure". At that time, selling thousands of units of Meta-Alloys at that station before the next weekly server downtime period could counteract the Sensors and prevent the shutdown entirely. If no action was taken, then after the weekly server downtime the station was forced to shutdown. If this occurred, the station would automatically begin repairing itself, but the process took several weeks on its own. Meta-Alloys could be sold there to increase the pace of repairs and shorten the shutdown period.

On November 29, 3304, Aegis announced a breakthrough in Meta-Alloy research that allowed extremely small quantities of Meta-Alloys to provide sufficient protection against Thargoid Sensor-related interference, and arranged for shipments of Meta-Alloys to be distributed to affected stations. This effectively marked the end of UA Bombing, as Thargoid Sensors ceased to cause technological damage to stations, and the sale of Thargoid commodities in general was legalized.[4][5]

Only recently discovered, these mysterious artifacts currently have no designation. Despite much conjecture as to the nature of these objects, it appears that the scientific community is unwilling or unable to openly identify the artifacts' origins. Such mystery only serves to make these objects more widely sought after by wealthy individuals and organisations alike, no matter that their unidentified status automatically prohibits them from being sold on any legal market.

13 March: The Unknown Artefact appeared for the first time as cargo on board the ship in the official 1.2 Wings trailer.[6]

14 March: Strange chatter in a Federal Convoy in the Tanmark system reported on Reddit.[7]

28 April: Dr. Arcanonn asks a simple question and starts the longest thread in Elite Dangerous Forums' history (now closed) which reached almost 10k posts and had to be redirected to a new thread.[8][9]

28 April: Michael Brookes comes into the forum thread and says "Have you listened to them? Garbled Morse code has since been discovered to be in the 'Chittering' part of the sound;[10] Multiple video and audio recordings of Thargoid Sensor noises were compiled and analyzed by pilots in an effort to decode their meanings.

30 April: YouTube video posted by a user who had previously posted a UA hoax, so nobody believed it.[11]

4 May: Wishblend finds the first UA in 109 Virginis, but unfortunately doesn't get it.[12] Henceforth officially celebrated as UA Day across the galaxy, and the official title of UA Seeker was born. That afternoon, a further number were spotted but RedWizzard finally managed to actually grab one in Timocani.[13]

4 May: [Player Submitted] GalNet reports baffled 'scientists' (players involved in the search and recovery UAs) having found an Unknown Artefact.[14]

17 May: [Player Submitted] Dr. Arcanonn accuses the Federation of a cover-up of the UAs.[19]

18 May: Analysis of Soontill Relics finds no direct link to humans or Thargoids, further tests planned.[20]

20 May: [Player Submitted] Tonnes of Biowaste dropped at 78 Ursae Majoris in protest against Federal cover-up of the UA, Dr. Arcanonn denies links with the action.[21]

23 May: [Player Submitted] A weird message is broadcast from someone somewhere trying to say something negative about the 'scientists' efforts.[22]

28/29 May: Conspiracy theories abound concerning the recent disappearance of Starship One and President Halsey.[23]

22 June: CMDR MahdDogg publishes his panel discussion about Powerplay, in which CMDR Kerrash mentions that "about the whole UA thing, there is something behind that, but no one has figured it out yet" (29m 30s) and that "[Frontier] have put some really obvious [clues] in there and we don't want to put anything else in" for fear of spoiling what is to come in the future.[24]

5 July: CMDR Kerrash comes into the new thread, asks "Has anybody cracked it yet?", when gently prodded follows up with "Frontier did not spend all this effort in making a wild goose chase, I would imagine quite the fanfare when the truth is uncovered. BTW Are we even sure it is Morse code?" and "Yes there is more to it, I will see if I can get FD to drop another hint".[26][27]

10 July: [player submitted] UA Scientists claim a breakthrough that the UA broadcasts its closest celestial body (or station) in a form of Morse code.[29]

14 July: CMDR Patau82 spots another convoy in Timocani, but unfortunately fails to grab it.[30]

19 July: CMDR Branch finds another UA, the first known commander to retrieve two. This replaced one he had loaned to CMDR Zenith, which was lost to a player killer (not pirate).[32]

25 July: CMDR Branch finds another UA, bringing the known possessed count back up to 3. This is also the third UA Branch has recovered.[34]

28 July: CMDR Blain Crighton & his wing manage to obtain two Unknown Artefacts from the same convoy.[nb 1] One of theirs was accidentally crushed after being released in a station, the other was sold at Leonard Nimoy Memorial Station.[35]

4 December: The Canonn Calls for Halt to Artefact Sales.[50]

8 January: The Canonn Searching for Barnacles in the Pleiades.[53]

20 May: Malfunctioning Starports Restored with Meta-Alloys.[59] 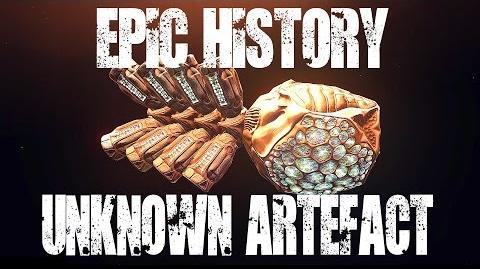 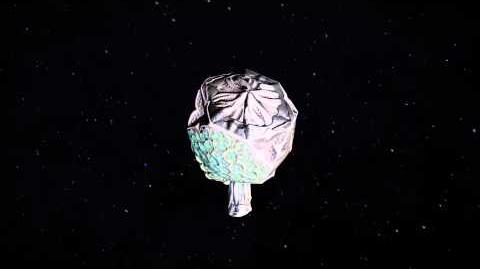 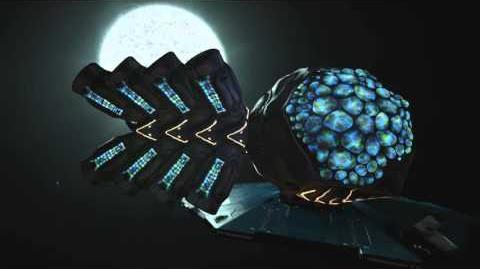 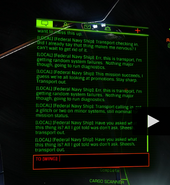 NPC chat at a Military Convoy transporting a UA

Unknown Artefact degradation over time. A UA can survive 6m40s before exploding.