Elite Dangerous Wiki
Register
Don't have an account?
Sign In
Advertisement
in: Thargoids, Structures, Points of Interest,
and 2 more
English

A Thargoid Surface Site,[1] also designated an Unknown Structure Scan, is a sprawling, seemingly ruined Thargoid structure found on planetary surfaces. The first site was discovered on June 26, 3303 on planet B 1 C of the HIP 19026 system, and over 200 other sites have since been confirmed. They are devoid of any significant Thargoid activity aside from Scavengers, but the systems they are located in are usually swarming with Non-Human Signal Sources.

Thargoid Surface Sites consist of a central, organic-like structure in a crater or depression at the center of a spiral formation with more organic formations protruding from the spiral's eight arms. The central structure is a smaller spiral with shorter arms, reminiscent of a Thargoid Interceptor's general shape. A possible eight-panelled door that is oriented flat with the surface can be seen at the center of the structure. Tunnels lead below the surface and seemingly deeper into the site itself, but are blocked by doors that can only be opened by carrying a Thargoid Sensor or Thargoid Probe. Vehicles that approach or enter the central structure will experience some light electromagnetic interference that disrupts their HUD. There are two types of sites, "active" with no collapsed areas, and "inactive" with collapsed areas. As new sites are discovered, some also appear to be more developed or complete than others, with a greater proportion of their structure visible above ground.

Scattered around the site are "Unknown Uplink Devices" and salvageable but highly corrosive "Unknown Technology Samples". Scanning these can produce three kinds of Material data: Thargoid Material Composition Data, Thargoid Residue Data Analysis, and Thargoid Structural Data. In addition, the Organic Structures across the site can be destroyed to obtain Materials ranging from Sulphur and Iron to Meta-Alloys.

Inside the central chamber of a Thargoid Surface Site is a mechanism identified as a Thargoid Device", originally known as an "Unknown Device". Activating the Device requires one Thargoid Sensor, Thargoid Probe, and Thargoid Link. All three items will open the door leading into the structure.

Thargoid Links can be found at Surface Sites, but Sensors and Probes must be sourced elsewhere and transported to the Sites; Corrosion Resistant Cargo Racks are helpful in this matter. Thargoid Probes can be found orbiting Ammonia Worlds in Threat Level 2 Non-Human Signal Sources. Thargoid Sensors can be found at Crashed Thargoid Ships, such as at HIP 17403 A 4 A or HIP 17862 6 C A, or free floating in various systems within an approximate 150 light year radius from the Merope system.

Once activated with all three objects, the Thargoid Device generates what appears to be a holographic star map highlighting specific systems across a galaxy, and emits three "Unknown Signals" that are logged in the Notifications tab. Spectrograms of these signals produce maps.[2] The dot positions appear to change when the star map is generated.

It was also discovered that any one of the various artifacts found at the Ancient Ruins of the Guardians produces an adverse reaction when placed in the Thargoid Device. The machine begins pulsing with energy and producing intense heat that can rapidly damage any non-Thargoid vehicles in its vicinity. This reaction lasts for several minutes.

The first Thargoid Surface Site was located on HIP 19026 B 1 C on June 26, 3303 by CMDR Lightningwing. The Site was the origin of an "Unknown Signal Source" identified after a beacon in Maia directed CMDRs to comm relays in the Electra and Calaeno systems. Logs obtained from Communication Hub Zeta 12 orbiting the planet Electra 4 and Relay Station PSJ-17 orbiting the planet Calaeno 1, both locations associated with the mysterious Black Flight unit, contained the following coded message:

This led directly to the first Site.[4][5] By the following day, four additional Sites had been discovered in nearby systems. The discoveries were hailed by Professor Palin, a noted Thargoid researcher, as a remarkable development.[6]

On July 5, 3303, Palin acknowledged that the structures provided valuable insight into Thargoid technology and also confirmed a connection between Thargoids and Unknown Artefacts and Probes. Ram Tah, the lead researcher on the Guardians, commented that the reaction Thargoid Devices have to Guardian artefacts suggests the Thargoids and Guardians may have had prior contact, and that this may not have been peaceful.[7]

The first 15 sites discovered by CMDRs are listed below. The Canonn Interstellar Research Group maintains a 3D Unknown Site Map with additional known locations, and a full list of all 229 sites can be found here. Note that an additional site is believed to exist in the HIP 22460 system, which is also the location of the Megaship Overlook, but this system is currently permit-locked and the site cannot be confirmed.[8] A 229th site was discovered on planet 2 A in the Outotz ST-I d9-6 system, well away from the known Thargoid sites, following a Thargoid attack on The Gnosis on September 6, 3304.[9] 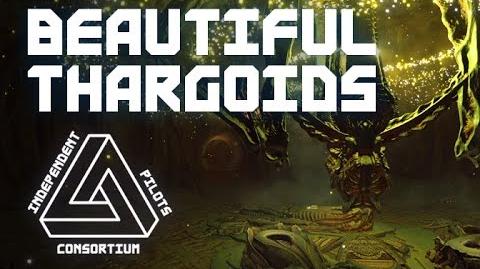 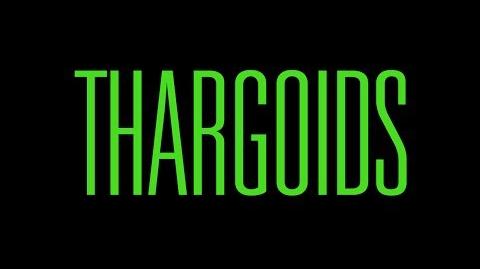 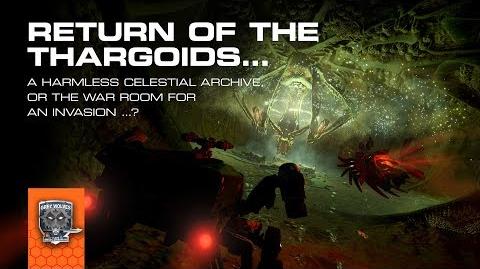 RETURN OF THE THARGOIDS - What Awaits The Core Worlds Of Humanity ... 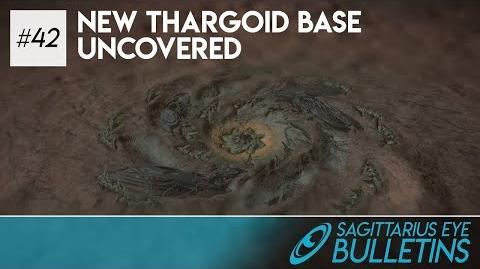 The Site at ground-level

The interior of a tunnel

A close-up of a Scavenger

The Site at high altitude for scale

The central structure as seen from directly above, featuring the door

A second view of the central structure