No one knows The Sarge's real name and he won't reveal it, even to close friends. He's an ex-Federal Navy specialist who worked closely with the now defunct Colonial Drones Corporation, and later with the drone division of Core Dynamics, in tweaking drone controllers and long range patrol support systems. His reputation is such that he's attracted followers who learn from him and have built up a range of facilities around his initially modest operations.

The Sarge is an ex-Federal Navy specialist and engineer who specialises in cannons and limpets. His workshop is The Beach, located in the Beta-3 Tucani system. 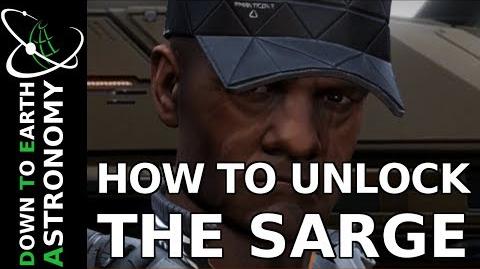 HOW TO UNLOCK THE SARGE
Add a photo to this gallery
Retrieved from "https://elite-dangerous.fandom.com/wiki/The_Sarge?oldid=140645"
Community content is available under CC-BY-SA unless otherwise noted.