The Scourge is the third Interstellar Initiative. It began on October 10, 3305 and ran until October 30, 3305.[1] The initiative was launched in an effort to counter a rash of mass crop failures in key agricultural systems, such as Diso and Orerve, which had resulted in a critical shortage of staple foods in regional markets. In the weeks preceding the initiative, the Rockforth Corporation had also attempted to bolster declining crop yields by distributing a new product, Rockforth Fertiliser. The Interstellar Association for Agriculture later found that Rockforth Fertiliser had been contaminated with a crop-destroying pathogen by the radical anti-capitalist group Scythe of Panem, and the tainted fertiliser had spread a virulent blight to hundreds of systems. Although the Scythe of Panem was neutralised and a cure for the blight was produced, the blight itself could not be fully contained and remained a lurking threat to galactic food stocks. 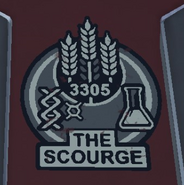