Start a Wiki
watch 01:28
Elite Dangerous Lore: Type-10 Defender
Do you like this video?

The Alliance commissioned Lakon Spaceways to produce the versatile Type-10 Defender, which represents a comprehensive revision of the Type-9 Heavy. Boasting greater speed, acceleration and manoeuvrability than the Type-9 and a more focused hardpoint layout. It was envisaged principally as a combat vessel, but its sizeable cargo hold makes it equally useful to traders.

The Type-10 Defender is a Lakon Spaceways ship that represents a comprehensive revision of the Type-9 Heavy. The Alliance commissioned Lakon to build the Type-10 to combat the escalating Thargoid threat following a series of attacks against Stations in the Pleiades Nebula. Announced on December 17, 3303, Lakon committed to an aggressive production schedule that delivered the Type-10 in volume to retailers the following week.[1] Lakon intended the Type-10 to be "particularly effective in combat situations".[2]

The interior of the Type-10 is identical to that of the Type-9, including the same co-pilot placement. It also has the same hardpoints, however, it now has 4 additional large hardpoints; 2 on both the top and bottom, near the medium hardpoints. The utility mounts are similarly located in the same places, with a few extra dotted in symmetrical fashion

Like the Type-9 Heavy it was based on, the Type-10 Defender is a slow, bulky ship, having the tied lowest manoeuvrability with it. It is, however, far more versatile than the Type-9. The Type-10 is not only faster than the Type-9; it has significantly stronger armour and with a very high hardness value, better heat management, double the utility slots, four added large weapon hardpoints, and two Military Compartments, making it a viable warship. In fact, the Type-10 on paper has both the highest defence and damage output of any ship. The Type-10 retains the Type-9's compatibility with Multicrew and ability to mount a Fighter Hangar.

When compared to similar ships in its price range, those being the big three, Anaconda, Cutter and Corvette, the Type-10 has better armor and similar shielding to the Anaconda, as well as the single best theoretical damage output in the game. In practice, however, a situation where all hardpoints can converge on a single target is difficult to achieve, especially so with fixed weapons and against medium and small targets, due to the ship's mobility and hardpoint spacing. The ship works exceptionally well with turret hardpoints, having the highest number of size 3 hardpoints of any ship in the game, which is the largest possible size for a turret; this also aids it in covering its blind spots against small and agile opponents.

With a Class 7 frame shift drive, its jump range is above average for a large ship and is superior to that of the Federal Corvette and Type-9, making it decent for jumps across the bubble. It should be noted, however, that this ship has low manoeuvrability in supercruise, which makes Interdictions difficult to perform and avoid.

Unlike the Type-9, it cannot hold a class 8 Shield Cell Bank alongside its class 8 Shield Generator, although it has the advantage of a short shield regeneration cycle for its ship size, and a significantly more resilient hull.

The Type-10's focus on combat-readiness comes with a trade-off in potential cargo capacity, as a result of its dedicated Military Compartments. The Type-10 can still haul more than most other ships and be configured into a well-protected heavy trader, but the Type-9's higher capacity and lower purchase price make it a more attractive choice for pure trading. The Type-10 also attracts the highest class of pirates, equipped with Anacondas or other heavy-hitters. However, its higher Mass Lock Factor enables the ship to enact swift escapes into supercruise.

The Type-10 is a highly effective ship in PVE combat; having turreted hardpoints set to fire at will, can allow the ship to destroy most adversaries without the player needing to press a button, making it possible for the player to personally fly a ship-launched fighter without the need of an NPC crew member to pilot the Type-10.

The Type-10 also features mobile structural elements, like the Diamondback Explorer. The ship's small wings are extended during flight, but will fold up when landing gear is deployed.

The Type-10 has an available 12 piece cosmetic Ship Kit that can be purchased from the Frontier store which allows you to "remodel your ship in your personal style". The ship kit does not affect gameplay.

All ships are highly customisable through the Outfitting menu of Station Services. Listed below is the default load-out for the Type-10 Defender. 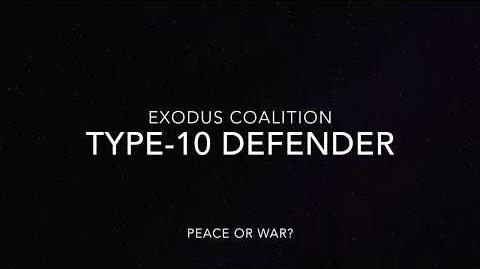 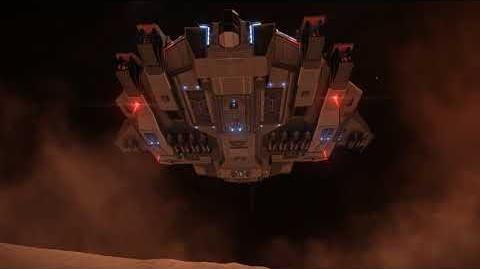 First glimpse of the Type-10 Defender before its reveal

A front view of the Defender

Type-10 Defender and a Terrestrial Planet

Type-10 Defender in a wing

Type-10 Defender and an Asteroid Base

Internals of the Type-10

Bottom view of the Type-10

Type-10 Defender Blueprint
Add a photo to this gallery

Retrieved from "https://elite-dangerous.fandom.com/wiki/Type-10_Defender?oldid=129283"
Community content is available under CC-BY-SA unless otherwise noted.