The Type-9 Heavy is one of the largest cargo ships on the market. While it lacks the carrying capacity of the Imperial Cutter, it is significantly less expensive and can be purchased without acquiring ranks in the Imperial Navy. Furthermore, the ship's ability to equip a fighter bay makes It popular with traders looking to protect their cargoes from criminals.

The Type-9 Heavy is a ship manufactured by Lakon Spaceways. It is the largest of Lakon's five freighter models, as well as the largest dedicated trading ship. It has the second highest maximum cargo capacity of any ship available, behind only the Imperial Cutter, but can be purchased at a fraction of the Cutter's cost and does not require any rank. Although generally lacking in offensive and defensive capabilities, the Type-9 is a bulky yet capable ship best suited for trading or mining.

The Type-9 shares a maneuverability rating of 0 with the Type-10 Defender, its combat-oriented variant, and also has one of the lowest base speeds of all available ships. Combined with its large size, the Type-9 has extreme difficulty in shaking smaller ships from its blind spot and evading enemy fire, but using a Fighter Hangar could help mitigate this. It has five weapon hardpoints to defend itself. Equipped with medium sized turrets, they can force enemy ships to operate with caution and give the Type-9 a chance to escape. However, the low maneuverability makes it much harder to avoid FSD interdictions, so Type-9 pilots should expect to be dragged into combat with hostile ships, which can be especially problematic for time-sensitive missions. It also makes normal supply missions a death sentence since the Type-9 will be unable to avoid fire from more powerful foes.

As a trading ship, the Type-9 has the second best cargo capacity of all ships, behind only the Imperial Cutter, but the difference between the two is only 4 tonnes. Furthermore, the Type-9 can downgrade to a Class 5 Shield Generator, while the cutter can only equip a minimum of Class 6. Thus, for pilots who want to fly a trader with a shield, the Type-9 has the best cargo space in the game. Due to the Cutter's very high repair and rebuy prices, and the Type-9's interdiction vulnerability, going shieldless in either case is not recommended.

The Type-9 has a massive fuel tank that can hold up to 64 tons of fuel. This gives the Type-9 a large range before needing to refuel: about 100ly when fully laden. This allows the Type-9 to move around the bubble without a fuel scoop when exploring for new trade routes, or when trading rare commodities (though smaller dedicated exploration ships are better suited for that task). However, for shorter range trading, one should consider downsizing the fuel tank to reduce weight so as to increase the ship's jump range.

The Type-9 has actually seen some niche use as a combat vessel. Although its low number of hardpoints makes its offensive damage lacking; when engineered and turreted they can deal decent damage. The biggest advantage the ship has is its dual Class 8 compartments which allow both a max level Shield Generator and Shield Cell Bank; which can often make taking the ship down difficult without engineering. However, while this is possible on paper the issue is that having both cell banks and a shield generator; along with Shield Boosters is rather difficult with the ship's Power Plant. Engineering or a Guardian Hybrid Power Plant, as well as power management, are mandatory for this strategy to function. Because of the low number of hardpoints and low speed, the weapons and engines will draw less power, meaning there is more power for systems. Furthermore, this makes it advisable to upgrade the system's capacity with engineering for the power distributor.

Its four utility slots are good for Shield Boosters and can help with a lower grade of shield. Chaff Launchers are not advisable, as the ship is often too large and slow of a target for them to be effective. Point Defence Turrets also don't work too well as the large body will cut off half of the turrets range and the low maneuverability will make it impossible to face the turret in the right direction in time; thus an Electronic Countermeasure would be a better fit for the Type-9.

Many pilots have problems fitting through Access Corridors when they are first getting used to the Type-9, which can result in increased expenses in the form of rebuy costs. A Standard Docking Computer or Advanced Docking Computer can be useful for pilots who have trouble docking this ship, and it will usually dock the Type-9 no slower than piloting it manually, unlike with other ships. It will also prevent earning Bounties and Fines from hitting other ships, which is quite hard to avoid in a Type-9 even for veterans. It should also be noted that the Type-9 Heavy has better maneuverability when stopped; even though this is not very useful in combat, it is handy for docking.

The pilot's seat is located in the front center of the ship's canopy, with two co-pilot seats on platforms below the pilot on either side parallel to each other. The Type-9's canopy has one of the widest views of all ships, which can be helpful in a variety of flight and landing situations.

On December 20, 3303, Lakon Spaceways released a revised model of the Type-9 known as the Type-10 Defender, which was commissioned by the Alliance to help counter the Thargoid threat. The Type-10 improves upon the Type-9's features by adding various combat-oriented improvements while sacrificing some cargo capacity.

All ships are highly customisable through the Outfitting menu of Station Services. Listed below is the default load-out for the Type-9 Heavy. 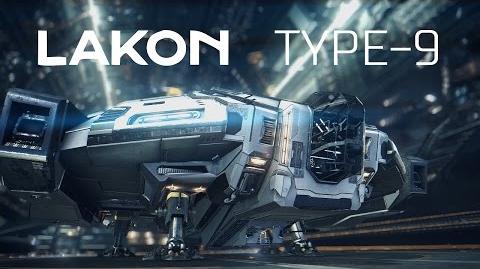 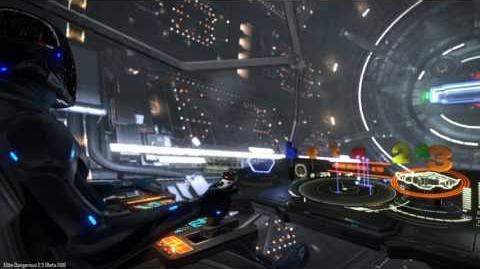 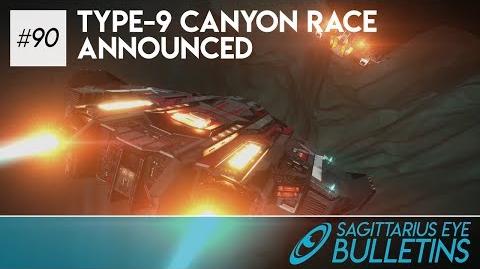 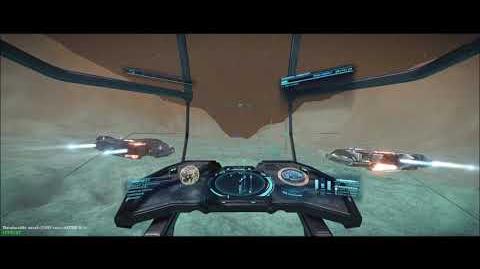 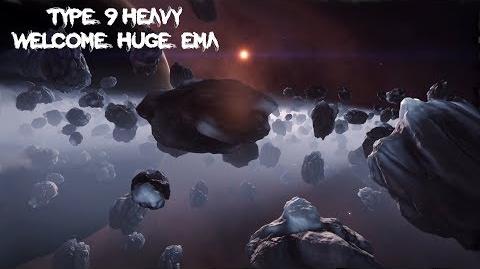 T9H - Top down from behind

Type-9 in a nebula

Type-9 Landed on planet surface with rover in foreground

A Type-9 near a black hole