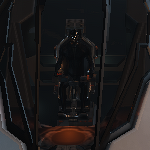 Master Nikolai Albinus, third-rank servant of Her Royal Highness Princess Aisling Duval. Ranked as Novice, Merchant and Scout, but working on it.

A proud Eagle pilot, even long after I worked up the money to fly something bigger, but I do keep a Cobra around for hauling large loads. Yes, I can't take an Anaconda, but it's hard to work up the enthusiasm to buy a ship like a Vulture or a Viper when you are used to flying circles around them until they explode.

Looking to trade in my Cobra for an Imperial Courier, maybe with a Prismatic Shield Generator, once I finish grinding enough faction. Possibly keep hold of the Cobra for exploration.

Retrieved from "https://elite-dangerous.fandom.com/wiki/User:Nikolai_Albinus?oldid=135137"
Community content is available under CC-BY-SA unless otherwise noted.