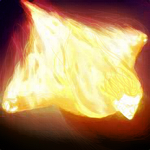 CMDR Darkrun is a member of the Pilots Federation. Early in his space pilot career on he operated primarily as a bounty hunter and mercenary, supplemented by rare commodity trading, courier jobs, and assassination. Exploration became a focus later, and was his first Elite rank.

In the chaotic time after the disappearance of President of the Federation Jasmina Halsey Darkrun pledged allegiance to Alliance Prime Minister Edmund Mahon but soon defected to the Empire, unsatisfied with Mahon's appeasement of the Federation. He pledged allegiance to Senator Arissa Lavigny-Duval and supported her ascension to Emperor. He fought against Emperor's Dawn in LTT 874, Namarii, Tabaldak, and Kausalya.

On Christmas Day 3301, Darkrun left the service of Emperor Arissa Lavigny-Duval. Initially he was still loyal to the Emperor and the Empire, but being an official agent of the Emperor painted too much of a target on his back while pursuing other endeavours.[note 2] In 3303, the chaos around Senator Kahina Tijani Loren dispelled Darkrun's scant remaining trust in the galactic superpowers and the political system at large.

Darkrun collects permits, possibly as part of some grand clandestine scheme, maybe in order to have places to flee where enemies may be unable to follow, or perhaps just out of an insatiable curiosity. He was mildly amused when, in February 3302, the Phekda system's new rulers The Ancients of Mumu revoked the permit restriction, making the permit he had earned from the Phekda Society an obsolete collectors item.

Retrieved from "https://elite-dangerous.fandom.com/wiki/User:RichardAHallett?oldid=129811"
Community content is available under CC-BY-SA unless otherwise noted.