The Trident (XG7) is the first commercially viable fighter to emerge from an engineering project combining human and Guardian technology. Having superseded a number of earlier, unsuccessful models, the Trident is both agile and fast, surpassed only by the F63 Condor in terms of speed, and second only to the Gu-97 Imperial Fighter in terms of manoeuvrability. The fighter has a relatively light hull, however, so once its shields are down it is comparatively vulnerable. This model is equipped with an integrated rapid-fire plasma weapon.

The XG7 Trident is a Ship-Launched Fighter created by the Engineer Ram Tah using Guardian technology and data obtained from Guardian Beacons. It is equipped with three Fixed Plasma Autocannons.[1]

In contrast with human-manufactured Ship-Launched Fighters, the XG7 Trident is an all-rounder that relies on its unique Guardian weaponry. It is slightly slower than the F63 Condor, slightly less manoeuvrable than the Gu-97, and has significantly less armour than the Taipan, but its damage output is substantial, especially against Thargoid craft.

The Trident's fully automatic Plasma Autocannon is an energy weapon with the lowest damage-per-shot (8) of all three Guardian hybrid fighters, but deals absolute damage, making it effective against both shields and hull. The weapon can fire for relatively long periods of time without overheating due to the Trident's lower heat generation.

The Trident is the most effective of the Guardian hybrid fighters against human ships. While it deals lower overall damage than human Ship-Launched Fighter models, its Plasma Autocannon's absolute damage gives it a clear advantage against any ship with average resistances that are greater than 35%. This makes the Trident an ideal choice when confronting challenging targets.

Be aware that during combat against a Thargoid Interceptor, its Thargon Swarms will prioritise any Ship-Launched Fighters in the area and quickly destroy them. Eliminate as many Thargon Swarms as possible before deploying a SLF to allow it focus on Thargoid ships unimpeded.

The XG7 Trident can be permanently unlocked for purchase by providing the following Materials to a Guardian Technology Broker: 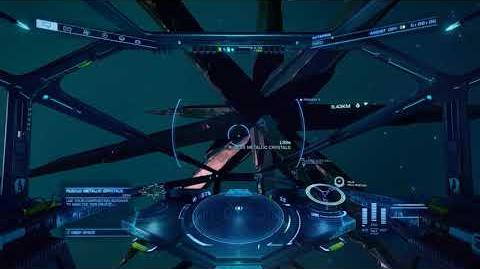